Ransomware in a Pandemic: A Perfect Storm

COVID-19 has provided cybercriminals with a unique opportunity to take advantage of remote workers lack of preparedness and lack of security to make a lot of money.

The way we work forever changed with the onset of Coronavirus. As companies everywhere closed their doors and pivoted to a remote model with little time to prepare, the disruption of the newly dispersed workforce was creating the perfect storm for cybercriminals. Evident by the barrage of ransomware attacks thus far in 2020, and the vast number of malicious campaigns exploiting Covid-19.

Over the past several months cybercriminal rings have found success with Covid-19 themed attacks. Victims have been lured with everything from phishing emails containing Fake News around vaccines, malware hidden in free downloads for video conferencing software and malicious advertisements for commodities in short supply such as hand sanitizer. All inevitably designed to infect an organization with ransomware. 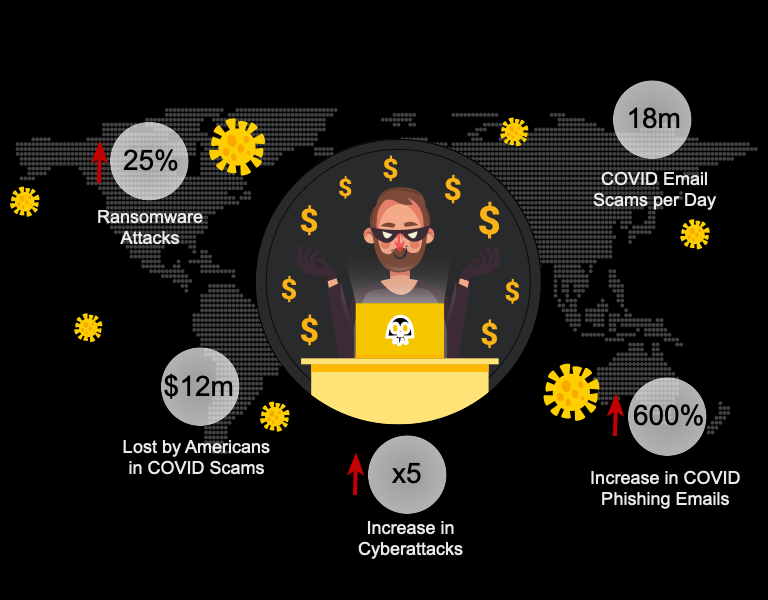 BlackFog does NOT send data to the cloud for analysis

BlackFog STOPS the activation of threats and data theft

Ransomware attacks have significantly more consequences than the cost of remediation, assessment and regulatory reporting.

Information technologies services giant Cognizant provides a sobering example of what can happen. The company who is one of the largest IT Managed Service Providers in the world, saw their revenues decline from $509 million to $360 million in less than one quarter after the attack, even while industry revenues were still soaring.

It certainly doesn’t help that this company was in the industry of advising other companies about how to protect themselves. More recently, a subsidiary of DXC Technology, a large global MSP provider, announced that they also suffered a ransomware attack that took services offline for several hours.

How BlackFog can Help?

Intrusion detection systems such as Firewalls and Anti-Virus solutions that remove known infections are not enough to prevent attackers from infiltrating the network.

The inherent mobility of today’s workforce and the number of new remote workers emerging in the wake of Coronavirus is making it increasingly difficult for companies to keep track of what’s happening on every device in the network. With a significant proportion of network transactions taking place in the background without consent, it is important that organizations are closely monitoring this activity. Preventing the transmission of sensitive data to unidentified servers in regions where high levels of cyberattacks originate is paramount to protecting all network infrastructure.