In versions of Windows 7 with patches after January 1, 2016 the operating system will complain that the driver has not been digitally signed as shown below. A signed Driver Error. While the driver has been digitally signed, it was signed with a SHA1 certificate which has now been deprecated by Microsoft for applications released after January 1, 2016. 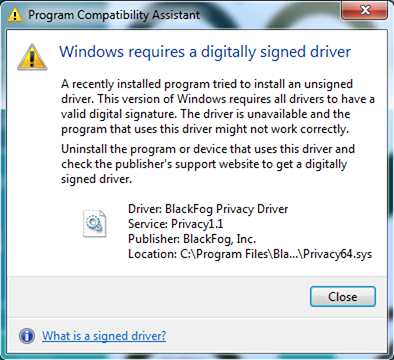 To solve this problem please download version 1.0.4 or later from:

This edition includes a driver signed with a SHA256 certificate and will work without this error. Please ensure you have first uninstalled the existing version and then reboot your machine before reinstalling the new version.  This will ensure the older driver is not interfering with the new one.

Was this article helpful?
Yes No